‘We’re back’, declared Jo Sidhu QC outside London’s Royal Courts of Justice this morning – as hundreds of barristers nationwide once again turned out in force for the second week of strike action over legal aid funding.

‘Our criminal justice is on its knees. It’s not an exaggeration to say it is in meltdown,’ Sidhu told the crowd, who heard that more than 1,000 cases up to March 2022, within the space of a year, had to be postponed at the last minute because the courts were unable to find an advocate to cover the case.

Last week the Ministry of Justice announced criminal barristers will receive a 15% fee rise from the end of September. However, Sidhu said the fee increase will only apply to new cases. ‘When will those cases be heard? A long time from now.’ With the Crown court backlog currently hovering around the 60,000 mark, the crowd was told the fee increase is unlikely to reach practitioners’ pockets until late 2023 at the earliest.

Ministers were accused of patronising legal aid lawyers with their words of gratitude for keeping the wheels of justice turning throughout the pandemic. ‘We do not want a pat on the back. We want to be treated fairly,’ Sidhu said. ‘When they bandy around a percentage, remind yourselves over the last two years the criminal bar has lost 28% of its real income.’ 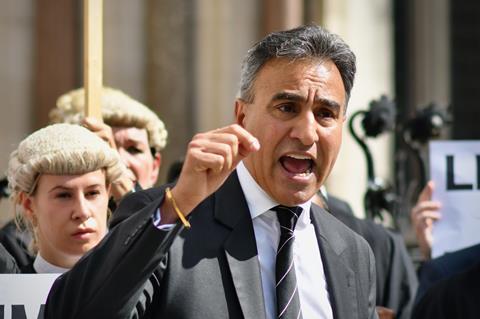 He added: ‘We have always said this dispute is about preserving and ensuring the long-term sustainability of the criminal justice system. I have been doing this job for nearly 30 years. There are a lot of good folk around me who have started their careers with great hope. In the first, second, third year they realise this is never going to be a job that will pay the bills for them – their rent, their debt, the shopping. They are ordinary people just like everyone in society. How can they survive on £12,200 as a median income in the first three years? We do not blame them for leaving but we are sad that they are going.

‘Do not blame us minister for the situation we are in. Do not go to the media and tell them we are adding to the backlog. It was 58,000 before we took any action. Prior to that the backlog was 60,000. It’s not on us. It’s on them.’

Several junior barristers also spoke out today to highlight the harsh reality of being a legal aid lawyer. One barrister told the crowd he earned £200 for four days’ worth of work last week. Another barrister paid travel and accommodation costs out of his own pocket for a three-trial day in Manchester. When he arrived at court, he was told the trial was being adjourned for nine months.

This week’s strike will span three days, escalating to four next week. Sidhu said the strike could be called off in 10 seconds with just one phone call from justice secretary Dominic Raab saying he is willing to talk. ‘My phone has not rung. This is on him.’

Thank You Cards For Business